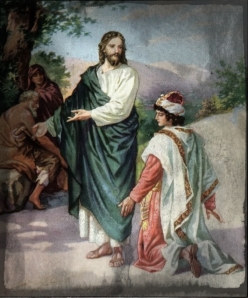 This passage bothered me for a long time. Why did Jesus say that? Wasn’t Jesus a good person?

I put this question out to Facebook once, but I didn’t get a satisfying answer. One answer that was interesting was that someone suggested that Jesus wasn’t a good person in His fleshly state, but only in His glorified state. That just didn’t sit well with me.

I have also heard this passage used by some groups who claim that Jesus is not God. They point to this passage as proof that Jesus is not equal with God. Of course, I don’t agree with them. There is such an abundance of scripture that speak of Jesus’ divinity that it is impossible for a reasonable person to deny it. But with that being said, why in the world did Jesus say what He said in this passage??

After reading another scripture just before this one, it finally dawned on me. I read Matthew 16:13:

Jesus asked His disciples, saying, “Who do men say that I, the Son of Man, am?” So they said, “Some say John the Baptist, some Elijah, and others Jeremiah or one of the prophets.” – Matthew 16:13

It’s interesting to note that in the disciples’ answer to the question about who men said that He was, none of the answers were ‘the Son of God,’ or even ‘the Christ,’ for that matter. It was only Peter who said, “you are the Christ, the Son of the living God.”

Why? Mostly because Jesus didn’t want them to – yet.

After Peter calls Jesus the ‘Christ, Son of the living God’, Jesus commanded them to tell no one (Matt 16:20). A bit later, Jesus is transfigured on the mountain. A voice came from heaven saying, “This is my beloved Son, in whom I am well pleased. Listen to Him.” Even after that great experience, Jesus tells those three privileged disciples to ‘tell the vision to no one until the Son of Man is risen from the dead’ (Matt 17:9).

And you’ll also remember how when Jesus would cast out demons, many of them would cry out with a loud voice saying, “You are the Son of God!” But Jesus would forbid them because they knew who He was (Luke 4:41)

So Jesus didn’t want people to know who He was. Why? I have some ideas, but I don’t know for sure. I haven’t taken the time to study it out. But that’s another subject.

Now you’ll notice, when Jesus answers the young ruler’s question, He doesn’t deny that He’s a good person. Instead He says, “Why do you call me good?”

Remember, that in Jesus’ mind, He knows that He is God, He doesn’t consider it a crime to be equal with God (Phil 2:6), but in the young ruler’s mind, Jesus is nothing more then a very exceptional man. So what Jesus is trying to get across to this young man was that even the most exceptional, holy, righteous, virtuous, and self-denying men of the world are still not good when compared to God.

Jesus was a master at using words. He never denied that He was good or that He was God, yet He was still able to make a strong point to this man and to us. Remember, Jesus said, “Why do you call me good?” If the man would have answered, “Because you are the Son of God,” then Jesus would have had to say, “You have spoken rightly.” But since this was not in the young rulers mind, Jesus was able to make His point.

Yet, truly Jesus is good, and He is God.

He was good because He was sinless (2 Co 5:21). Sin is not only the failure to obey the commandments of God, but also the failure to do all the good that we know we ought to do (James 4:17). So that means that Jesus obeyed all the commandments of God perfectly, and also did all the good that it was humanly possible for Him to do when He was in the flesh. I know no better definition of the word ‘good.’

So what’s the point of all this? The point is that this generation has a twisted idea of what ‘good’ is. Many people now, who do not believe that Jesus is the Son of God, still think He was a good person, just like the rich young ruler did. What would Jesus’ response be to them? “There is none good but One – God.”

The truth is that we are all sinners. We all have gone astray, we all have been disobedient. Everyone of us can recall many times where we have known what was right but did not do it. We shouldn’t deceive ourselves into thinking we are good people – we are not.

This is so vitally important. If you don’t realize how lost your are, you won’t see the need for a savior. You’ll go off blindly into destruction forever, deceiving yourself the entire way.

God has given us His law, it serves the purpose of showing us our sin so that we might see our true need for a savior. Then, in our state of hopelessness, we can cry out to God. God will save us from our sin, and grant us everlasting life. Amen.

2 replies to Was Jesus a Good Person?